Ottawa County, Ohio, in its present form has in the past been a part of several other counties in the long process of division of the original Northwest Territory beginning in 1788.  Hamilton County, formed in 1790, was extended northward in 1792 to Lake Huron, and included all of what is now Ottawa County, with the exception of the eastern section which later became a part of the “Firelands.”  From 1796 to 1803, Ottawa County became a part of newly formed Wayne County, which included most of Michigan.  Subsequently, but prior to the formation of Ottawa County in 1840, sections of it were part of Trumbull, Franklin, Delaware, Huron, Erie, Sandusky and Lucas counties. 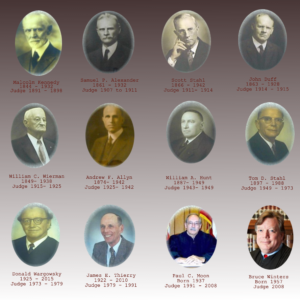 Ottawa County’s last circuit rider and first permanent Common Pleas Judge was Malcolm Kelly who served from 1891 through 1898. Judge Kelly was the grandson of William Kelly, builder of the Marblehead Lighthouse.  Judge Kelly was also the great-grandson of Benajah Wolcott, the County’s first American Colonial settler and the first keeper of the Marblehead lighthouse. From Judge Kelly to the present time, there has been in succession 12 elected Common Pleas General Division Judges.

The Richardsonian Romanesque Ottawa County Courthouse, resting on a stone foundation, is characterized by arches and steeply pitched gables with finials. The square tower, located in the center of the roof, rises to 132 feet above the ground. The top of the tower contains a belfry for the clock chimes, and the clock faces are located in gables similar to, but smaller than, those below.

The courthouse is constructed around the central stairwell that rises to the second floor and forms a vault. Four scenes depicting Ottawa County are painted on the walls outside the courtroom: “Quarrying,” “Farming,” “Fishing,” and “Fruit Growing.” These four original industries of the county also define in large measure the significant immigrant groups that settled here. The French were the fishermen, the Danes were the farmers, the Germans were the fruitgrowers, and the Slavic peoples worked the quarries. The chandelier, hanging from the middle, was taken from the courtroom when it was remodeled and the ceiling lowered.

Above the double stairway landing hangs a copy of William Powell’s mural “Perry’s Victory on Lake Erie.” The original (installed March 30, 1865) hangs in the Ohio State House and a significant replication appears in the Senate Wing of the Capitol Building in Washington, D.C. While the mural may not be of museum quality, the battle just off the shore of Port Clinton had national ramifications, so that the mural deserves its prominent position.

After the Revolutionary War, the British maintained a presence in North America, and there were many instances when they failed to respect American sovereignty. In June 1812, the United States declared war on Great Britain. The west, especially Ohio and Ottawa County’s northern border, Lake Erie, was one of the battlegrounds.

A young Oliver Hazard Perry, aged 27 years, (1785-1819), became commander of naval operations on the lake, with the intimidating assignment to destroy the British naval power. Perry built and trained an armada at Presque Isle (near Erie, Pennsylvania) and on September 10, 1813, before noon, the British and American fleets joined battle a few miles from Port Clinton. After the thorough defeat of a British fleet, Perry sent a victory dispatch to General William Henry Harrison: “We have met the enemy and they are ours – Two ships, two brigs, one schooner, and one sloop.”

The entire construction period of the courthouse lasted from 1898 through May 20, 1901, when the county commissioners and building committee accepted the new courthouse, total cost of construction being $61,500. The exterior of the entire building is constructed of North Amherst sandstone and interior steps and wainscoting of pink Tennessee marble. The original intent of the building committee was to face the Structure with native limestone from Marblehead quarries; however, agreeable arrangements could not be reached with the quarry. The interior murals described above were completed in 1908 and restored in 2008.